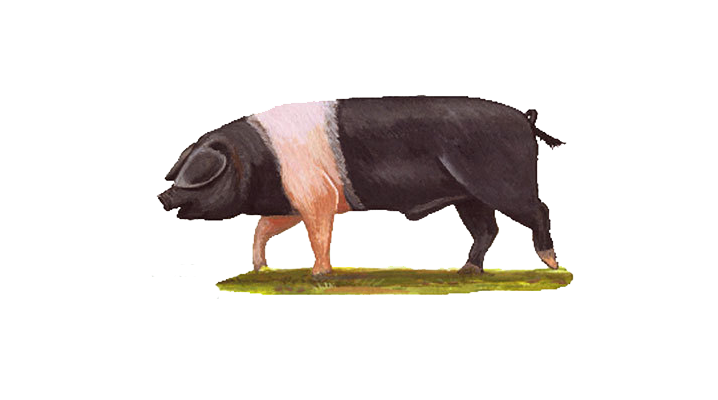 I believe the amalgamation happened in the 1960s and the Saddlebacks were the most popular of the coloured breeds. The mixing of the two breeds did not improve in the high bred vigour even though both breeds had their own male and female blood lines. Very few breeders mixed the two breeds, and obviously there was a lot of criticism, but it was progressive for its future, and would obviously save costs as they both had their own societies. The Wessex had the N.P.B.A. and the Essex had the E.P.S. so the N.P.B.A. took over the two breeds. Both breeds had breeders that had their own annual pig sales but the Essex had more of these and an Annual Society Show and Sale. Both had large outdoor herds and the cross-breeding with white lines of Large White, Welsh and Landrace, and a few others were the major factor for meat production mainly of pork and heavy hogs.

The Essex breed was mainly in the East and South East of the country. It was the whiter of the two breeds, some very white wide saddles, white tip in the tail, white rear sock feet, thicker shoulders, fuller hams. A few had badger white noses and slightly bigger ears.